As a beekeeper, you must understand several important factors regarding your queen. The queen is the most important bee in the entire colony. She lays the eggs. She determines the overall health and productivity of the colony. She even influences how hygienic her daughters are toward mites and disease. And though she may live three or four years, she will be at her best only for one to two years. After that, she needs replaced. Out of all the hives I have lost over the years, yearly requeening would have saved most of my hives.


The queen! You gotta love her. You know that when you go to bed at night, your queen is keeping the hive together.

Not all beekeepers replace their queens every year or two. Though requeening has so many positive benefits, it just takes time and it is expensive unless you raise your own queens. Therefore, many beekeepers don't bother, and yet they complain about how they didn't take off as much honey or how the hive has mites.

You should seriously consider requeening your hive once a year. You will need to determine where to buy your queen from stock that you prefer.

I'll address queen stock in a moment, but for now, let's consider requeening a hive. Who? When? What? Where? and Why? These are questions surrounding requeening a hive. Beginners seem to be reluctant to requeen, because most beginners do not have the confidence yet to open a hive, maticulously search every frame until the queen is located, grab her in your hand, and put the hive back together quickly. But, it really isn't all that bad. Let me give you some tricks of the trade.

Simply put, here's how to requeen a hive. Find the old queen if the hive still has a queen, remove her and introduce the new queen. That's it. Sounds simple, and sometimes it is just that simple. However, more often than not, it takes a bit more work.

We've talked about why to requeen, not let's talk about when. July-September is often viewed as the best time to requeen because it allows your young queen time to become well established with her hive prior to winter. In fact, she may lay some good brood of winter bees. Winter bees live a few months longer because they are not working much during their lifetime due to mainly riding out the winter in a cluster. And, when spring arrives, a new queen will be ready to lay as the weather warms up. However, requeening in September is more difficult because during September there is not a heavy nectar flow and bees more readily accept a new queen during a heavy nectar flow.

I prefer August because it produces the most Spring benefits. However, it also carries with it the most liabilities. A liability might be that the bees will not accept her, and the weather may keep me from inspecting to insure she is accepted and laying well. Thus, there is a risk in removing an old laying queen for a new one, because the new one could be a dud, worse than the older one. No queen in September means no winter bees...you get the picture. It's worth the challenge, but it is a challenge.

HOW TO SPOT THE QUEEN

Use a frame holder. Back in my early days of beekeeping, I had trouble finding my queens, because I could carefully search a frame, put it back in the hive, pull out another frame and never find her. Why not? Because I missed seeing her, or as soon as I started pulling a frame out, she would jump onto a frame that I had just inspected and placed back into the hive. The trick? Use a frame holder. We sell these simple frame holders that slip onto the top of the hive body so you can hang inspected frames outside the frame until your inspection is complete, preventing the queen from jumping back onto an inspected frame.
Learn to spot the queen by those around her.

Look at the picture to the left and see if you can spot the queen. The bees have formed a partial circle near her.

When looking at a frame full of bees, if you can't find the queen try looking over the entire frame and observe how the bees are behaving.

Two things signal a queen. First, she is often encircled by bees. This is called her retinue. Not always, but often enough that you should look for this circle of bees. Secondly, bees get out of her way. In addition to these two signals, I've even tracked her down by her occasional sound she sometimes makes. It's almost like a faint sound of a smoke detector only more rapid and with a slight buzz. This is called piping. It is most common when a queen is newly released and it not heard so much from mated, established queens unless there is a new queen being introduced in a hive that already has a queen and the two are politicking for followers.

I Found Her And Want To Replace Her...Now What Do I Do?

Normally, a queen will not sting when beekeepers pick her up. Unlike the working bee, the queen does not lose her stinger but it is rare for her to sting the beekeeper. I've never been stung by a queen, even when holding them captive in my hand. But it is possible.

Usually if you are removing a queen to requeen a hive you probably do not want to use that queen in a nuc or another hive. You are requeening her usually because she is too aged or substandard. Let me put it nicely. She's done. I will leave it to your creative thinking as to how you wish to end her life.

Timing is important. You need to have your replacement queen on hand before you kill the substandard queen. Once you remove the old queen, wait at least 24 hours before introducing the new queen. You may even wait up to 2 days. However, remember that your bees will know that they are queenless and will begin to resolve their problem by raising their own queen from a fertilized egg. This is one way to requeen a hive, just allow the bees to raise their own queen. In doing it this way, you have to wait three to four weeks before she will emerge, mate and begin laying. And remember that by raising your own queen she will have much of the characteristics of her mother. That may or may not be what you want.

So, after waiting a couple of days, you can now introduce your new queen. Before doing so, check the hive to be sure there are no queen cells. You can remove sealed queen cells and use them in other hives such as splits, nucs or queenless hives by gently pressing them into the comb of a queenless hive.

How Do I Introduce A New Queen?

There are many ways to introduce a queen. It boils down to two basic methods. Direct release and indirect release. Direct release is rarely a good idea as the bees will usually "ball" the queen and kill her. On rare occasions I have directly released queens into queenless hives successfully. Once I placed a little honey on the queen and set her in the hive. Bees will clean the honey off the queen, and possible accept her better. Sometimes I have sprayed down the hive with sugar water with peppermint extract in the water. The smell seems to neutralize the bees from attacking the queen.

On the other hand, the indirect release method allows the bees a chance to get used to the queen before she is free to walk among them. However, prior to her release, she must be in the hive, but kept safely from the bees who may want to initially kill her. 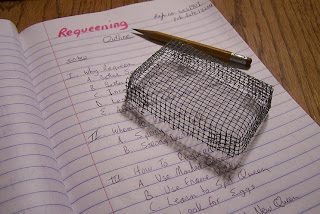 Old time beekeepers used a method that is still very successful even today, though many people have either never heard of it, or don't use it. It's a queen cage made out of hardware cloth, shaped like a square, about 1/2 - 3/4 inch tall with the bottom missing. It is pressed down over sealed comb with the queen inside, holding the queen within the cage. Be sure that no other bees are in the cage, only the queen. This gives time for the queen to be accepted by the other bees.

What has replaced this method is that of indirectly releasing the queen in cage she was shipped it, the mailing cage. These shipping cages are the same that are included with packaged bees. However, some queen suppliers are using a combination of a mailing cage and a push it screen cage.

When your queen arrives in her cage, the cage will have a candy plug on one end. You will have to remove the cork to expose the candy plug. Now, take a very small nail or pin, and carefully poke a very small hole through the candy plug. Be careful not to make it too large. And when you poke it through, be careful not to injure the queen on the other side. This hole will encourage the bees to begin to eat their way through the candy. This usually takes a couple of days.

Place the cage between the frames. By placing the candy plug up, the queen can always climb up and out and the opening will never be blocked by her dead attendants. By the time the candy plug has been eaten through, the queen will have become accepted within the hive. It is very important to wait one week before opening your hive after installing the new queen.

In one week, inspect the hive to ensure the queen is out of her cage, alive and if you have drawn comb you can inspect to see if she is laying.

Now, let's go back to the old fashioned cage that is pressed into the comb over capped brood. I like it! It works well. Any emerging bees within the caged area immediately take to their new queen. Her pheromone has a chance to spread over comb and on to other near by bees. This is a good method to use in September to help the queen become accepted in the absence of a nectar flow.

We make and sell these cages. Our cages do come with a small opening where you can insert a mini marshmallow. This serves as a candy plug, giving time for the bees to accept the queen while they eat through the marshmallow.

Trial and error will lead you to a good queen provider, and the supplier may or may not be a well known and long established breeder. You may find that the best queens are raised by the beekeeper down the road who has 30 or 40 hives and is willing to sell you a queen.

Personally, I am more successful in operating my hives with survivor stock queens, queens that I find in barns and trees, feral queens who have already demonstrated that they can survive cold winters, mites, disease and swarm very little. I keep track of the hives in my yards that continue to survive year after year and produce an above average amount of honey and from these hives I raise my own queens.

Which Race Of Queen Is Better?

There are many races of queens each claiming to have unique characteristics. Here's a few common ones:

Italian, Minnesota Hygienic, Cordovan, Caucasians, Carniolans, Russian, and Buckfast . It is so hard to obtain a strict race today. Most bees are mixed and in fact, the mute queen seems to do the best due to genetic diversity.

Check out all our upcoming beekeeping classes and our full line of beekeeping equipment we make right here in central Illinois.